Sometimes it's the simple things that really trip you up. Among those is keeping all the fasteners you need organized and identifiable. At first, that sounds like the simplest job ever, but it can have some complicating factors. If you use both metric and non-metric fasteners in your factory, you can't risk someone reaching for the wrong one. That just leads to poor mechanical function. Finding ways to keep these fasteners separate so that you use metric only in metric applications is essential for the safety of your workers and the customers who receive your products.

Labeled Compartments Are a Start, Not a Solution

The obvious move is to keep all fasteners separate and label everything appropriately. That's a good start, but it's only a start. What happens if a couple of those compartments spill and everything gets mixed together? What happens if someone has a few different screw types sitting near them, and one rolls over to another pile? Learning to identify the fasteners visually helps tremendously, as does reducing the types of fasteners you have to use.

Metric fasteners usually have a specific set of markings, often starting with ISO M or just M, on fasteners above a certain size. On most metric fasteners, regardless of size, you should see a decimal number imprinted on the head. If you've got a mess of bolts on your hands, separating out the bolts that have these markings takes care of most of the problem. You'll still need to separate the non-metric fasteners, but with the metric already removed from the mess, identification should go a lot more quickly.

Another way to make it easier to keep the bolts organized is to restrict the supply purchases you make to specific standards. Metric fasteners use a consistent measurement system, but the standards that the fasteners themselves use can vary a bit. It's easier now as most companies have gone with ISO metric standards, but if you have a lot of old fasteners sitting around, some of them may follow varying standards.

Check out the fasteners you have and try to replace older non-standard metric fasteners with ISO metric standard fasteners. Familiarize yourself and all your workers with what each fastener looks like at a glance to reduce the risk that the wrong type will be used. The result will be a more streamlined and organized process. 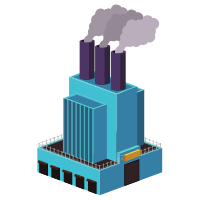 Take a look around at the industrial equipment in your facility. Hopefully it is all working and in good shape. If you want to keep it that way, you will need to provide it with the proper care. Every machine has somewhat different maintenance requirements, but in most cases, some lubrication and an annual inspection by a qualified repair professional will go a long way. Here's the thing: you can't be in this industry without the right equipment. So rather than spending more on new equipment, it is wise to care for the stuff you've got. Read more on this and related topics right here on this website about industrial equipment.